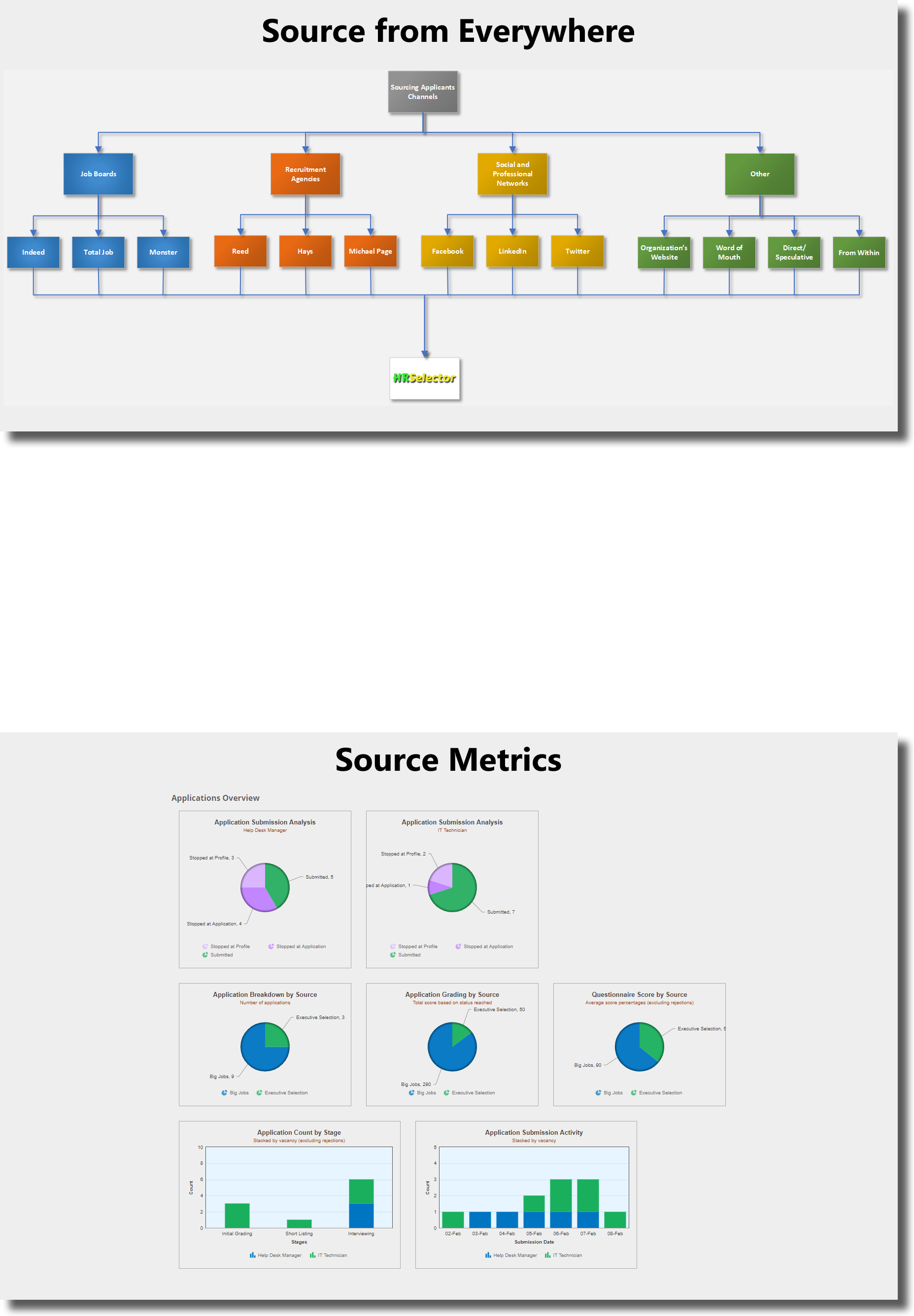 HR Selector allows you to cast your sourcing applicants’ net wide and far, utilising job boards, social and business networks, own website, word-of-mouth, recruitment agencies as well as including those that have contacted the organisation directly, speculatively or where applicants are being considered from within. Funnel Multiple Sources

No matter what the sourcing channel, all applicants are funnelled through a single campaign applicants’ starting point.

This ensures that you are able to assess applicants sourced from a wide range of sourcing as easily as it would be traditionally from one and also ensure that all applicants are considered on a like-for-like basis.

Some recruiters limit their use of recruitment agencies to one or two, primarily because of the associated administrative task that comes when dealing with multiple agencies, with HR Selector recruitment agencies can be provided with their own unique link, their agreed terms and conditions recorded, and the recruiter is able to measure the quality of candidates from each source and make intelligent comparisons between sources.

The recorded contractual terms are used to highlight to the recruiter where recruitment fees would apply.

Pre-screening questionnaires can be customised for each role and used to quickly identify and eliminate unqualified or unsuitable applicants. Extract CV Information

Pre-screening questionnaires can be used to extract information from each applicant’s CV so that like-for-like comparisons between applicants are made easier and to test an applicant’s knowledge and gauge their experience and relevant skill set.

Applicants can be asked to complete soft and hard skill self-assessments, tailored to the specific role and their self-assessments compared to an “ideal” candidate skill set.

Hard and soft skills are measurable by type of skill, level of proficiency and the skill’s relevance to the role.

Applicant can be requested to upload supporting documentation or examples of their work.

Pre-screening questionnaires and documentation can be staggered so that applicants are only asked for sufficient information that is relevant in order to advance their application.

All the applicant's requested information is made easily accessable through the application's dashboard. Overview reports are automatically generated containing radar charts and scored pre-screening questionnaires.

When applying for a vacancy, candidates can get frustrated when they receive no acknowledgment as to the status of their application. With HR Selector recruiters can keep the candidates informed as to their progress and unsuccessful applicants can be sent notification that is both personalised and reflective as to how advanced their application was.

HR Selector allows the recruiter to administer and schedule multiple round interviews, with multiple interviewers.

Interview time slots can be assigned to candidates by the recruiter or offered to all the invited candidates on a first-come-first-served basis.

On confirmation, notification and calendar attachments are issued to the candidate, interviewers and any administrative personnel.

Subsequent changes to confirmed interviews can be made by the interviewee or interviewers and all relevant notification generated to inform all the affected parties.

Interview packs can be prepared that contains full details of each candidate’s application, any test results and uploaded documentation. Included with the pack can be interview guides and suggested questions.

A record is updated to confirm who was invited and who attended the interview and their role. The recruiter is able to provide general information such as if the candidate arrived on time, was late or did not attend, the interview duration and any other relevant information.

Each interviewer can be requested to complete a post-interview write-up which can be comprised of an interview and skills assessment, and an assessment of the observed candidate personality traits.

Where candidates have attended and the same interviewer has conducted more than one round of interviews, the interviewer can be invited to fine-tune their individual assessment of the candidate from any previous interview rounds.

Radar charts are provided that overlay the role’s ideal skill-set, with any candidate’s skills self-assessment and the interviewers’ combined or individual assessments.

When a candidate is selected for hire, HR Selector will prompt the recruiter with a checklist to aid them to complete their due diligence prior to the issuing of a formal contract of employment.

On selection, the candidate will be provided with a non-contractual offer in order to establish and agree on the basic employment details such as job title, contractual hours, holiday entitlement, remuneration and start date.

Acceptance by the candidate to the non-contractual offer can trigger the recruiters due-diligence procedures.

Once an offer has been made the offer can automatically trigger further requests for information to the candidate that would be required by the recruiter in order to issue a formal contract and later enrol them on the payroll and grant them authorisation to access buildings and computer networks. For example, they might be required to provide the recruiter with full correspondence and banking details and next of kin information.

In addition to triggers that request information, requests to the candidate to upload supporting documentation can be initiated, this could include documentation that supports the candidate’s right to work, certificates of qualifications and proof of relevant licenses.

A checklist of the information, documentation and required references will be maintained and updated as the information is verified and marked as satisfactory.

Once the recruiter’s is satisfied that the checklist is complete or that sufficient information has been received the recruiter is able to issue an instruction containing all the necessary compiled information in order that a formal contract can be prepared and issued.


No matter what the source, all the applications will be funneled through a single gateway with applicants all using the same format allowing easier like-for-like comparison.

Save time through improved efficiency, removing duplication of effort and automating repetitive tasks.

Promote the Brand and differentiate your organization from the competition by providing potential new recruits with a good and professional experience.


A more efficient recruitment process allows vacancies to be filled quicker and reduces the chance of you losing out on the best candidates.

Dealing with Wrong or Unqualified Applicants

Reduce the risk of a Bad Hire by providing a framework that allows you to apply due diligence to the whole of the recruitment process.


Deploy pre-screening questionnaires to discourage unsuitable applications and through automatic scoring, quickly highlight and reject applicants that do not have the right experience or lack the necessary qualifications. We understand that evaluating new software applications can be daunting and time consuming so let us take the strain out of your product evaluation. Simply send us your vacancy's job description and on receipt we will review the information, set everything up, and get back to you with your no-obligation evaluation plan.

Send your vacancy's job description to This email address is being protected from spambots. You need JavaScript enabled to view it.

Each recruitment campaign is seeded using an organization's centralised information and then fully tailored to reflect the specific campaign's requirements.

The HR Selector sourcing module provides the recruiter with a sourcing management tool, to record where each vacancy is advertised and from which channels applicants are sourced such as an online job board or through a recruitment agency.

By generating a unique link for each recruitment source, as applications are automatically received in the HR Selector Inbox the system will automatically track and generate metrics allowing the recruiter to identify the most effective recruiting source.

All submitted applications will arrive in the HR Selector campaign's Inbox where the recruiter is then able to review each application and based on the information that each applicant has provided and sort the applications into the most appropriate folder; rejected, possible, probable and definite.

HR Selector allows the recruiter to continually re-evaluate each applicant's application based on the volume and the overall quality of the received applications.

From all the received applications HR Selector allows the recruiter to shortlist those applicants that initially appear to be a good fit.

When a candidate is shortlisted the campaign can be configured to trigger a request to the shortlisted candidate requiring them to complete further questionnaires or provide additional information or documentation before they are considered for interview.

Candidates from the shortlist can be selected for interview that can be in the form of a telephone call, conference call, audio/video or in person.

After the interview stage is complete if a suitable candidate has been found their application can be advanced to the offer stage of the recruitment process.

Before a provisional offer can be issued HR Selector ensures that a number of pre-defined pre-employment checks are completed and if required suitable references supporting the candidate's application obtained.

For each role HR Selector allows the required skills to be predefined and is then able to match each candidate's skills against the role's required skills.

Skill matching provides the recruiter with a clear measure as to how well suited each candidate is to each specific role. Campaigns can be configured to require each applicant to self-assess the relevant skills which can be compared later the with interviewers' assessments.

HR Selector allows the recruiter to predefine the personality traits of the ideal candidate for each specific role.

The personality traits that are considered to be relevant to a role can be self-assessed by the candidates themselves and then later by the interviewers during the interview stage thereby enabling the recruiter to compare applicants using consistent information.

At all times throughout the interview process the recruiter is able to display an overview report for each of the candidates.

The overview reporting offers the recruiter a consistently formatted report providing a clear indication of how each candidate's skills matches the role, how close their personality traits match the ideal candidate and if they have completed all forms and uploaded all the required documentation. Applicants remain in control of their personal data through their private accounts. Applicants can update their information and decide what information they want to share with what recruiters and can at any time withdraw an application and with it, the associated personal information.

This allows recruiters to automatically comply with their own privacy policy conditions, responding to applicant's right to withdraw their consent, and their right to have their information no longer processed and for the information not to be kept any longer than is necessary.

Recruiters are able to configure their campaigns so that only the necessary personal information is collected at each phase of the process, for example, an applicant's emergency contact details may not be required at the initial application phase but may be considered necessary when the applicant is made, and has accepted, an offer.

Have a query, require assistance, have a special request?